As a member of FSFE General Assembly I intend to:

2) give regular report on the actions taking place in Greece

3) promote Free Software in the Balkans: Albania, Kosovo, Bosnia-Herzegovina, Montenegro, Former Yugoslav Republic of Macedonia, Bulgaria and Croatia and Serbia which has already established an affiliation with FSFE.

Since I'm a man of peace, my statement is this. I tried to avoid the political issue using the name U.N. uses. I didn't use the acronym FYROM which is obviously irritating and maybe offending to many people. If the country is recognized as Macedonia from the U.N. I will call it like this.

As a member of an international organization I respect international charts and laws and not taking positive or negative position to any state that might has a dispute with another state. If I'm going to any country though, I respect people's will and call them and the country by the name they want. I am the guest and they are the hosts. I'm kind and civilized, not barbaric and offending.

That's my point of view and I believe I'm just. 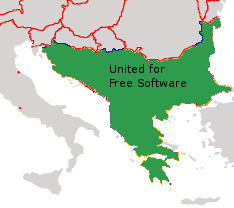 1) My first closer touch with longstanding FSFE GA will be useful for my personal experience in promoting Free Software.

2) In Greece there is much of activity which is not as much promoted as it should be. As a member of FSFE GA I could give a monthly report to the other GA members in order to strengthen the bond between Greece and the rest of Europe.

3) I have several contacts in the Balkans. I believe we can work with these people for the advocacy of Free Software in the Balkans especially Albania and Kosovo where annual FLOSS events are held. Some of the most notable are FLOSSK and Mozilla Balkans. Also one of the most active group in the region which is located in Skopje, invited last summer Richard M. Stallman to give the speech Copyright vs Community.